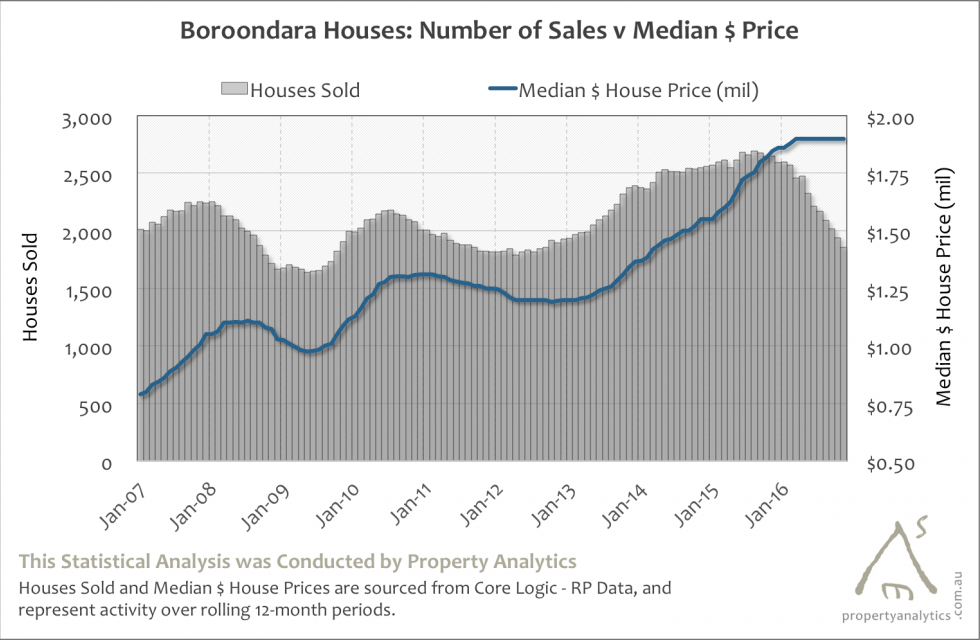 House Prices continue to rise (they’ve been increasing steadily since early 2013) but House Sales Volumes have been falling since January 2016.

Historically, volumes tend to move in-line with prices: as prices increase, more vendors choose to sell, and where prices flatten or decrease, fewer vendors choose to sell. There’s a positive correlation between the two, and this graph covering Boroondara Houses illustrates this pretty clearly.

But, look at what’s been happening recently – the number of Houses Sold has been decreasing steadily while the Median $ House Price has ticked up. Where about 20% fewer houses sold in 2016 compared to 2015, prices increased by about 10%. This is pretty unusual.

Talk to local agents and industry experts, and they’ll tell you that demand for quality housing remains very strong – from home buyers, investors, and foreign purchasers alike – but there’s just not enough stock to meet the need. The REIV reported a 75% Auction Clearance Rate for 2016, and this is evidence of strong competition between buyers.

So why are sales volumes so unusually low? There are a few reasonable explanations, ranging from global economic uncertainty, to domestic political fragility, and subdued consumer and business confidence. At a practical level, many potential vendors are reluctant to sell at a time when their purchase options are so limited (i.e. people don’t like to sell unless they have a property to move in to!). This scenario resonates most strongly with people looking to down-size into something other than an apartment. Unfortunately, it becomes a self-fulfilling market dynamic.

Whatever the reasons behind these recent trends, 2017 will prove to a very interesting year in Melbourne real estate. Interest Rates at record lows will continue to spur demand, and likely lead to continued price increases; the bigger question remains around sales volumes, and whether they will come back to historical averages over coming months.

One of the most obvious take-outs… It’s a good time to sell when so few competing properties are on the market. And, if you find a property that meets most of your needs, then snap it up.